Ukrainian lands are rich in rivers and lakes, so fishing has been one of the traditional crafts since ancient times. Ancient fshermen usually caught freshwater fish. Also anadromous fish was caught at the mouths of the rivers. During the Middle Ages, Ukrainian ancestors began actively consume sea fish imported by merchants from the Black Sea coast. During the Late Middle Ages, fishing farms in lakes and ponds become popular.

Crucian carp is one of the most common fish in Ukraine. Loves overgrown ponds with muddy bottoms and wetlands, avoids clean water and sandy bottom. Another subspecies of crucian carp – Prussian carp or Gibel carp pours clean running water. It is often found in large bodies of water and lakes. 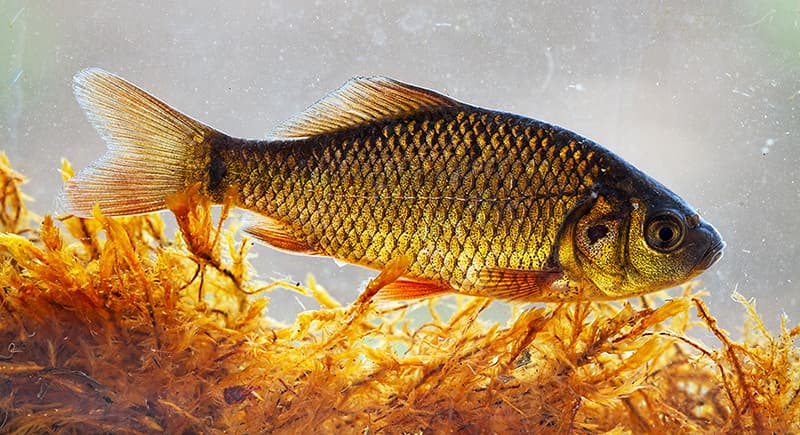 What dishes are prepared from crucian carp?

A crucian carp is fried in a pan or baked in the oven in foil. A popular Ukrainian dish is a crucian in sour cream sauce. It can be served both hot and cold.

Pike is extremely common fish in Ukraine. The most popular predatory fish, which has become a character in many folk tales and myths. Pike are found in almost all reservoirs, except very shallow with stagnant water. Specimens longer than 1.5 meters and weighing more than 30 kg are not uncommon.

What dishes are prepared from pike?

There are dozens of traditional recipes for pike: it can be fried, marinated, stuffed, stewed, pike soup. Ukrainians also cooked pike aspics for the holiday

Wels catfish is the largest freshwater fish in Ukraine. The body length of catfish can reach 5 m, weight – 100 kg at the age of 80-100 years. Catfish are predators that feed on other fish, reptiles, and small mammals. Easily recognizable by its characteristic flat head and mustache. Occurs in all rivers of Ukraine. 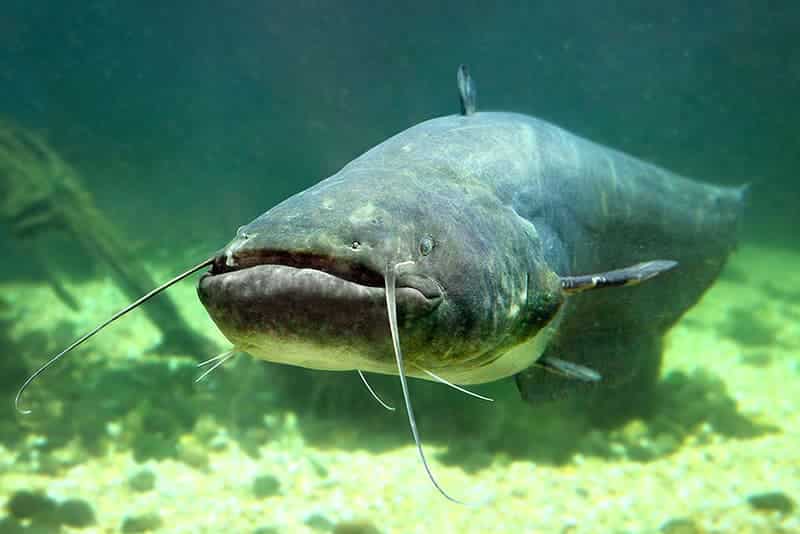 What dishes are prepared from wels catfish?

Traditionally, ancient Ukrainians considered catfish meat coarse and tasteless (probably because of its omnivorousness). However, the catfish tail was considered a real delicacy for both cooking and smoking.

Tench (Tinca tinca) — sedentary fish, living in stagnant waters with a silted bottom. Loves ponds and bays of rivers without flow. The tench can reach 7 kg in weight and 70 cm in length. Distributed throughout Ukraine and Europe as a whole. 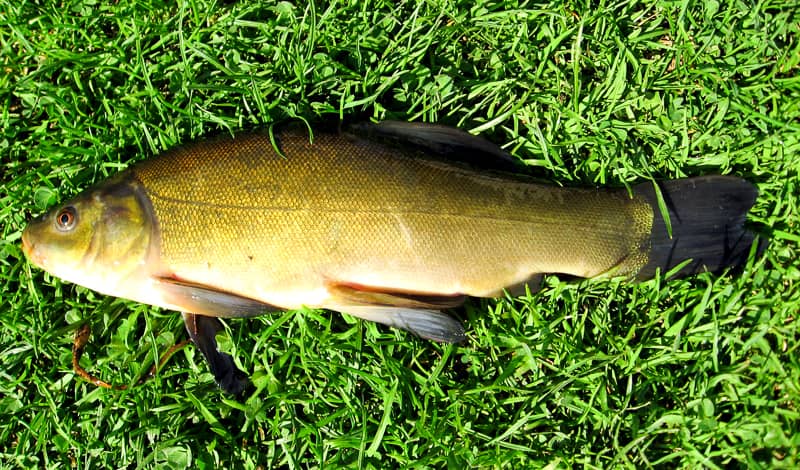 What dishes are prepared from Tench?

Tench is easy to prepare, but quite capricious in processing – cleaning and gutting. Dishes from it are extremely delicate in taste. Tench is suitable for baking in the oven, cooking, frying and even stuffing.

European carp is a very common fish throughout Europe, and one of the oldest farmed fish. It was caught in the Danube basin and bred on farms in the Roman Empire. In Ukraine, carp was considered a popular fish. In the 17th century, one of the cities was renamed Korop and received a coat of arms depicting this fish. Nowadays, carp makes up about 10% of all farmed fish.
Carp body length – up to 1 m, weight can reach more than 20 kg. There are also known facts of the existence of large specimens weighing up to 45 kg. Carp is an omnivorous fish, it can feed on both plants and insects, crustaceans and worms.

What dishes are prepared from Common carp ?

There are hundreds of recipes for cooking carp without exaggeration. It is fried, baked, stewed, marinated, stuffed, smoked, cooked in soup, and even grilled. The main disadvantage of carp is the large number of small bones, which have to be removed during cooking. However, delicious juicy meat makes it extremely popular among chefs.

Black Sea shad are common in the Black and Azov Seas. This is an anadromous fish that migrates from the sea to freshwater rivers to spawn. In the Middle Ages, the traditional place of herring fishing was the mouth of the Danube, so it was often called “Danube herring”. From southern Ukraine it was taken for sale to large cities.
Так the rescript of King Władysław IV Vasa mentions the following taxes:

“From a barrel of Danube herring – 6 grosh.”

Black Sea shad are small in size – length 30-40 cm, weight about a kilogram. It is a schooling fish that is traditionally caught with nets from boats and ships.

What dishes are Black Sea shad?

Herring can be cooked on the fire and baked in the oven, but it is traditionally marinated or salted. Serve cold. Tender meat of herring is often used for various salads and rolls.

Bream (Abramis brama) is common in all large and medium rivers and large lakes. One of the most numerous species of fish in Ukraine. It sharply differs in the vertically extended form of the body. The size of the bream is quite modest: adults reach 40-45 cm and 2.5-3 kg in weight. 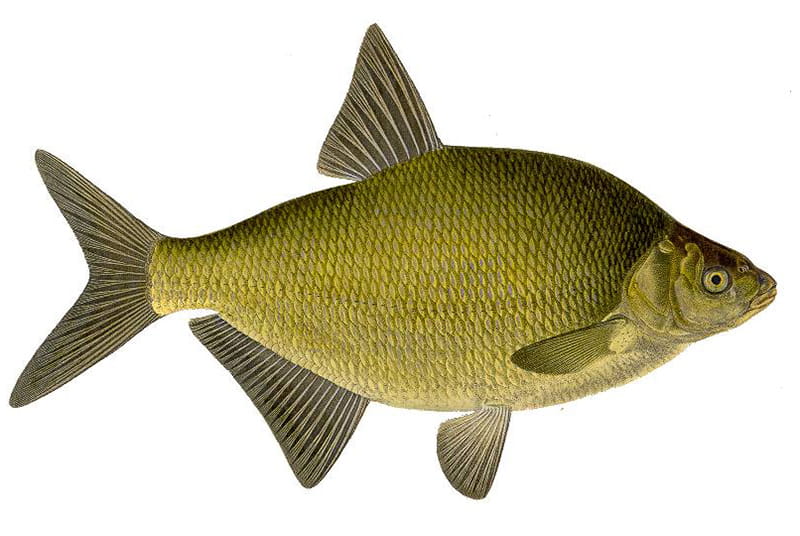 What dishes are prepared from Bream?

Bream is usually baked in the oven or smoked. In the Middle Ages, bream was one of the main fish for soup because of its prevalence and ease of cooking.

Common perch is common in all rivers of Europe (except the Iberian Peninsula and the Scandinavian countries). It has a characteristic appearance due to the striped green-yellow sides and bright reddish fins with sharp spiny cartilage. Perch is a predatory fish that swims in flocks and feeds on small fish, large fish fry, and other river animals. Perch is extremely voracious, which makes it easy prey for fishermen – it is caught on almost any bait throughout the year. Perch up to 40 cm long and weighs up to 2 kg. 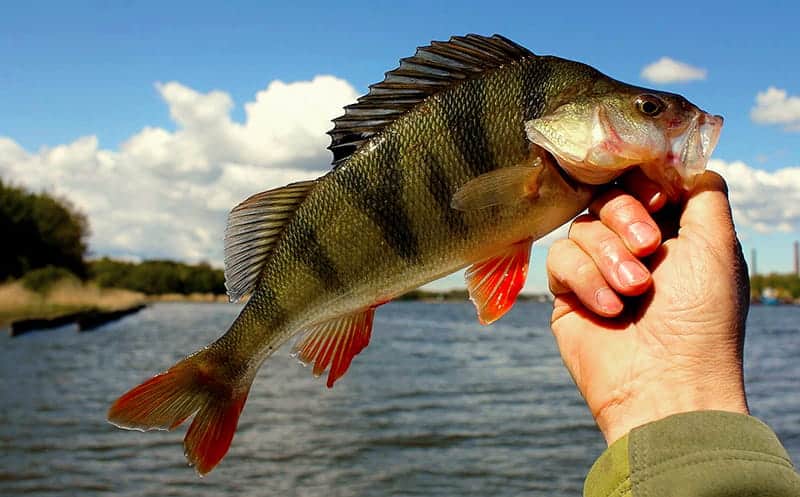 What dishes are prepared from common perch?

Perch is traditionally cooked on the fire, baked in the oven or marinated. In the Middle Ages, perch was most often used to make soup. As a rule, perch is baked, previously cleaned of scales, but there are recipes for small perch with scales.

Brown trout is a small fish that is common in Europe. Trout living in Ukraine is up to half a meter long and weighs up to 1 kg. This fish loves clear running water and clean lakes, so it is most common in mountainous areas and in front of the mountains.
The traditional way to catch trout is by hand, throwing the fish ashore out of the water. Also caught on a fishing rod or net. 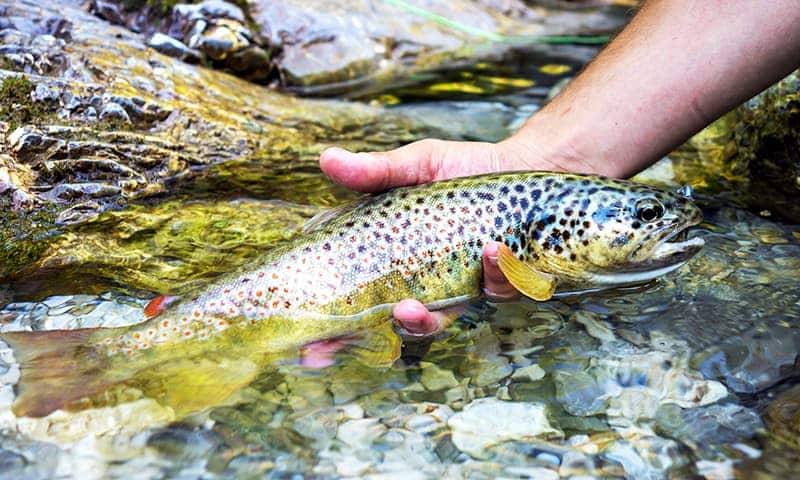 What dishes are prepared from brown trout?

Brown trout is considered a delicacy – it has tender, tasty, pink meat. It is fried in a pan or on an open fire. It is also often stewed and stuffed with fruit. However, most trout are baked in foil with various spices – thyme, pepper, and others.

The European eel is distributed throughout Europe, although it breeds exclusively in the Saragas Sea, near Bermuda. Having sailed to the European shores, the eel is kept at the mouth of the river. Upstream, mostly female eels rise. Eel has a characteristic elongated body up to 1.5 m long and weighs 4 kg.
In the Kyivan Rus times, the eel was considered an “unclean” fish due to its lack of scales and serpentine body. The eel was caught on a fishing rod or lured at night with light to traps. 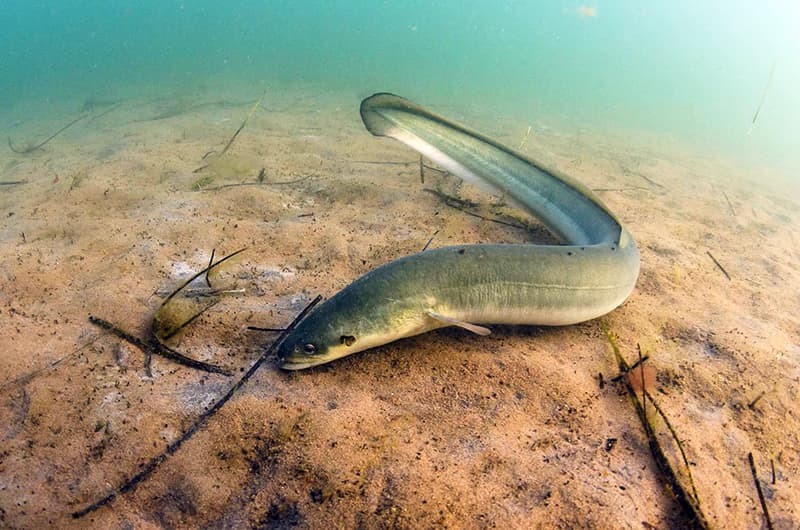 What dishes are prepared from European eel?

Today, eels are endangered, so catching eels in the wild is limited. Acne bred on farms is used for cooking. Eel is a rather rare fish on the table. It is valued for its taste and richness in polyunsaturated fats. As a rule, eels are baked or smoked – their soft meat absorbs the aroma of smoke well.

Crayfish (Astacus) can live in both rivers and lakes. But they live only in clean, fresh water in ponds with uneven bottoms, where they can make burrows. Traditionally, crayfish were caught with bare hands, pulling them out from under rocks, but in some places were used traps made of nets. The most common in Ukraine Galician (narrow-clawed) crayfish weighing about 200g and a body length of 15-20cm. 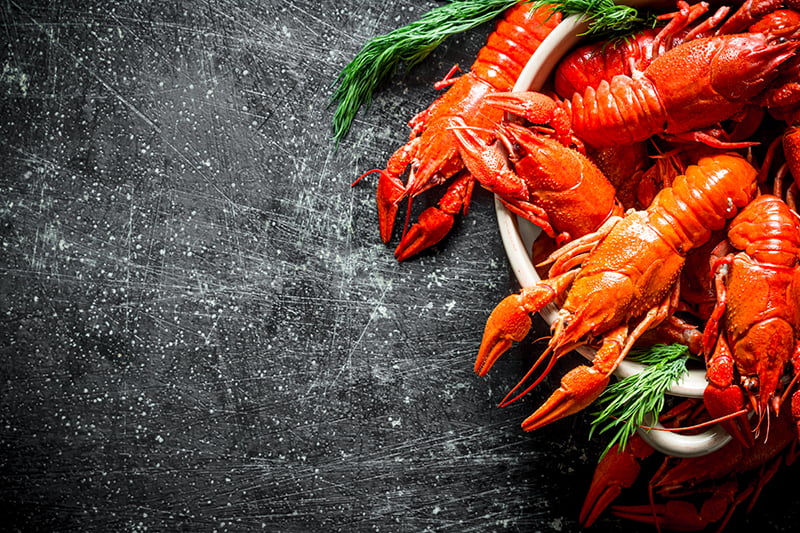 How to cook Crayfish?

Crayfish are extremely easy to cook – they are boiled in boiling water for 10-15 minutes, pre-washed from silt and dirt. The traditional recipe suggests that crayfish should be cooked alive, which often causes intolerance in many people.