About ethnic soups in Ukraine

Ukrainian traditional soups have been always a true masterpiece. Known for thousands of years they’ve come to our days practically unchanged in the base, totally formed in the Middle Ages. Ukrainian ancestors used animal hides, special naturally shaped stones with depth, pieces of trees, and then clay pots to cook an ethnic liquid dish in. Actually, it’s hard to believe that no potato, corn, tomatoes were cultivated in the Ukrainian territories till the 18th century, but the delicious taste and amazing flavor of traditional Ukrainian soups and stews will satisfy any gourmet. Etnocook has made a list of the most popular Ukrainian soup recipes, cook and enjoy.

“Without bread, it’s no lunch; without cabbage, it’s no borscht.” – Ukrainian proverb

This authentic red beet soup Borsch is famous all over the world and it is one of the unofficial symbols of Ukraine. The true history of the Borscht reaches the times when on the territories of modern Ukraine in X century was situated a powerful state Kyivska Rus (Kievan Rus) with the center in Kyiv and people there cooked Borshch, Varenyky, and other traditional Ukrainian dishes. 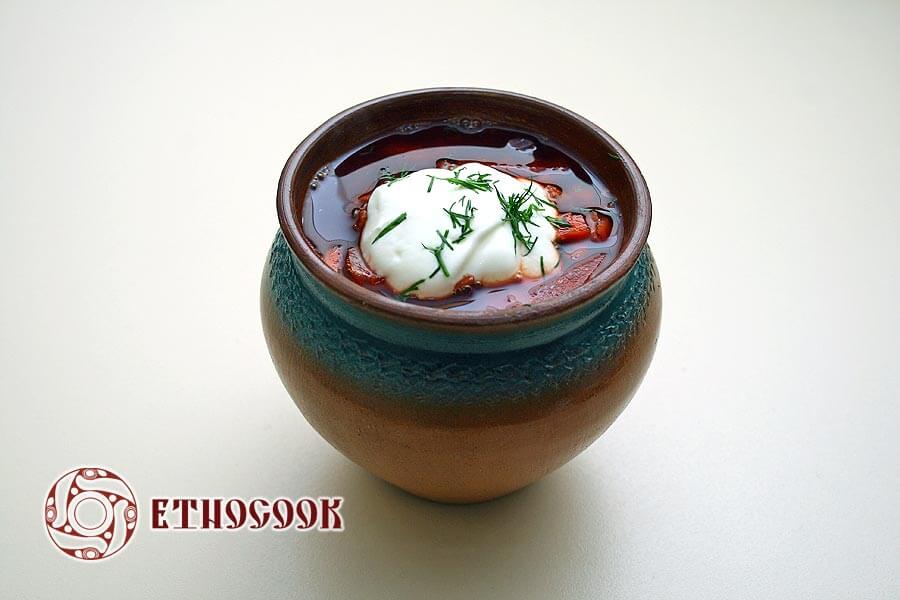 Among the big variety of the Ukrainian red Borshch soup recipes, the most ethnic one is without potatoes and with the red beet kvass. There are different types of Borshcht for every season, Borshch with meat and meatless, Green Borshch, and a lot of others. Actually, Ukrainian red soup Borshch considers being a superfood as it contains beets, spring water, onions, beans, cabbage, and other healthy organic ingredients with special nutrient-dense.

Besides, Borshch is not only everyday but a ritual dish also. This is a famous Ukrainian Easter Soup. Additionally, the red meatless soup Borscht with mushrooms is one of twelve dishes for Ukrainian Christmas.

It’s surprising, but not everybody can even imagine how different can be the Ukrainian green soup. In fact, the traditional recipe of Green Borshch is very simple and the dish itself is so light and refreshing. It includes not many ingredients, more liquid, some fresh first vegetables, juicy beans, poultry broth or spring water, sorrel leaves, greens, sometimes beet leaves. Traditionally brad kvass was added to make the liquid sourer. 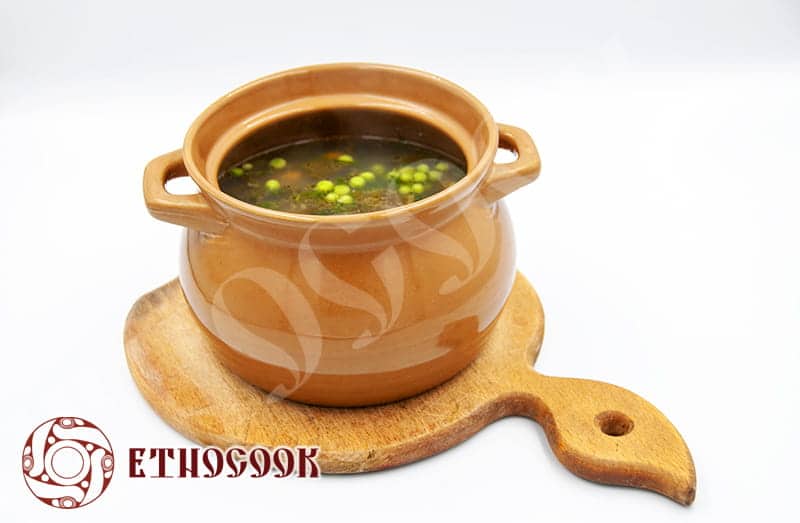 Green Borshch usually serves cold or hot with a big spoon of sour creams smetana. If you add halves of boiled eggs it will bring you good memories of a happy childhood. This Ukrainian sorrel soup is a masterpiece that must be eaten by everyone who wants to discover the soul of ethnic Ukrainian cuisine.

Actually, until recently, any soup in Ukraine, except Borsch, Kapustniak and Chyr, was called Yushka. Unfortunately, nowadays there are only two dishes, called Yushka: Fish Soup and Mushroom Soup. 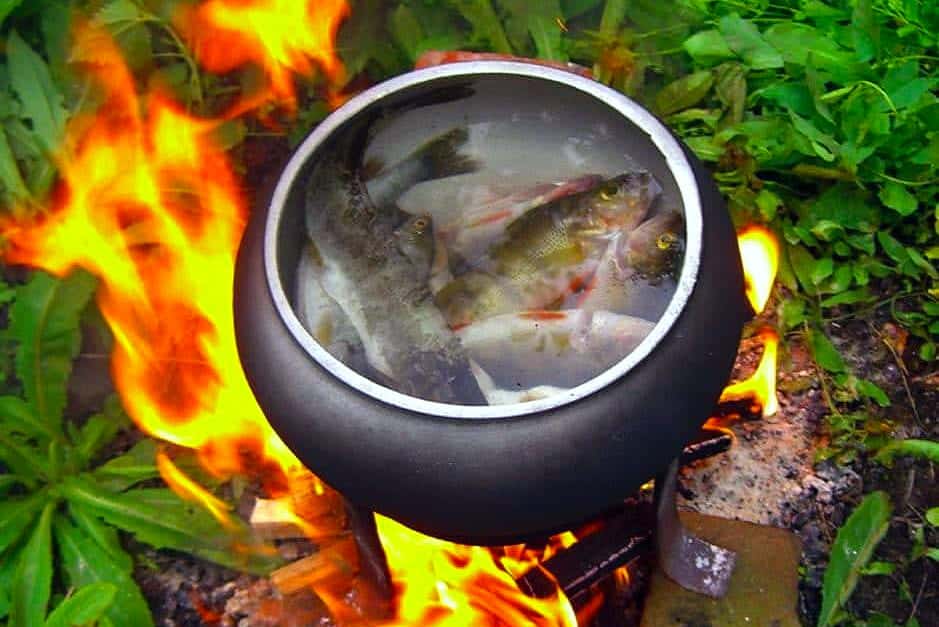 “Cossacks are as small children: give a lot of food – they will eat everything, give a little – they will be satisfied.” – an old proverb

Yushka has been associated with the Ukrainian Cossacks warriors, whose unique cuisine is a real treasure for modern people. They were famous to use food not only to eat but as medicine as fish is rich in phosphorus.

In fact, Ukrainian lands were always rich in resources, and gathering was widespread a long time ago before agriculture. Mushrooms are still used in Ukrainian traditional cuisine, they are stewed, dehydrated, boiled and, of course, used for cooking the tasty soup called Mushroom Yushka. 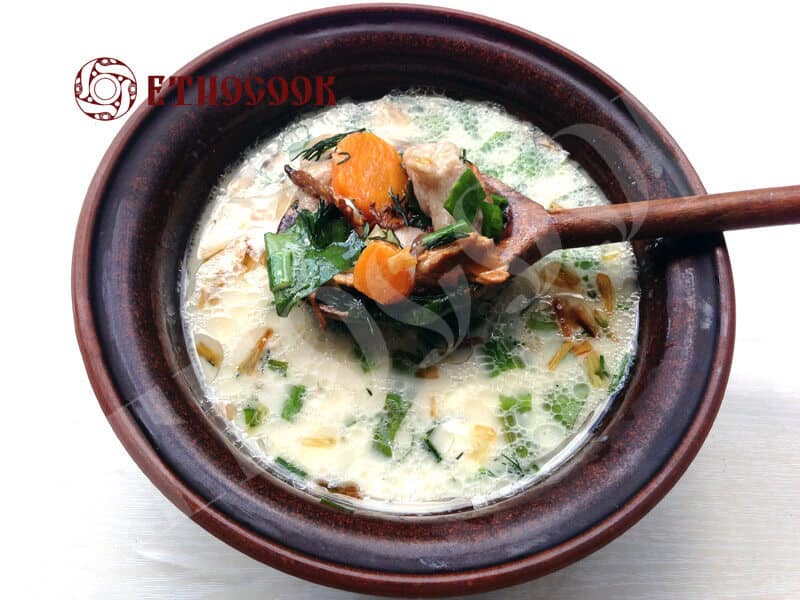 For this simple recipe any edible mushrooms can be used, in the Carpathian Mountains are gathered white mushrooms for Ukrainian Yushka. During warm seasons fresh mushrooms are used, for the traditional Ukrainian Christmas dinner soup dehydrated ones are taken and they give a special flavor to the dish.

Chyr is a very ancient traditional ethnic Hutsul dish, very popular in mountain territory on the west of Ukraine. It is the very simple traditional recipe of a tasty Ukrainian wheat flour soup. 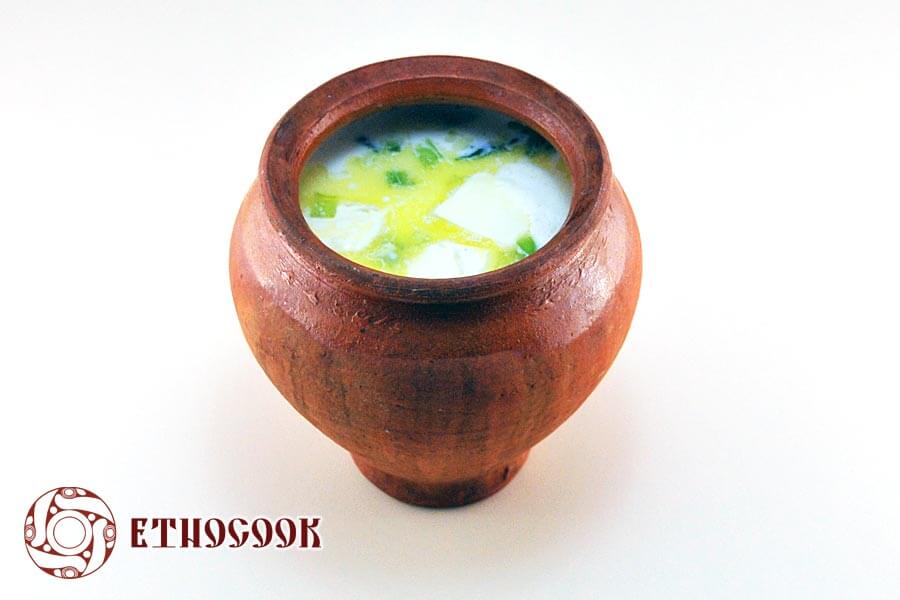 The authentic recipe s very simple and you need only a few ingredients to cook a nutrient and delicious Ukrainian dish. Just mix flour with milk, put it into a clay pot, and slow cook in the oven until you receive the unusual frugal Ukrainian treat.

Actually, nettle soup is one of the variants of a green Ukrainian soup but with a special cooking technique because of stinging leaves. 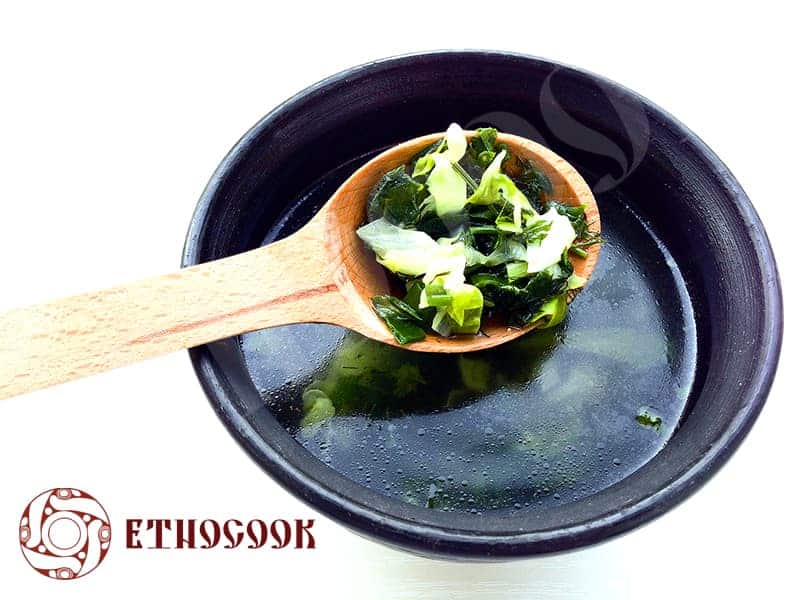 It is one of the most ancient dishes in Ukraine. Ukrainian ancestors used a bowl of aromatic delicious green nettle soup as a dish and as a medicine. It has been cooked in early spring when people feel a lack of vitamins. In fact, nettle leaves can help to prevent different diseases because they contain a high level of vitamins C, B2, E, K1, A, pantothenic acid, iron, potassium, manganese, calcium. In addition, this amazing soup is used for mild body detox.

This is an amazing yellow soup usually cooked in the autumn and winter season. In fact, the pumpkins in Ukraine differed from those modern ones brought from the American continent. Authentic pumpkins here had another shape, not round but as a lamp bubble. 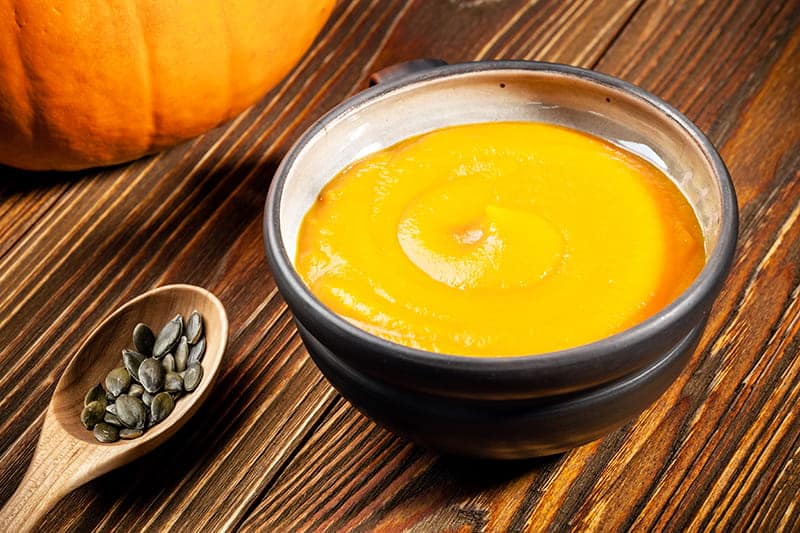 These are also the edible type of Cucurbita, squash. Squashes have been cultivated by Ukrainian ancestors for a long time and are in old tales and folklore.

During the traditional Ukrainian pre-wedding matchmaking, the pumpkin given by the girl to the elders meant her refusal. There are also expressions about such cases “present pumpkins”, “get a pumpkin”.

Ukrainian pumpkin soup recipe is as easy as it can be imagined. Usually, it is made of puree from stewed or baked pumpkins, adding meat or vegetable broth or spring water, seasoning, greens.

Solyanka is a hot spicy soup that has been loved in Ukraine. This is a special dish cooked with meat or fish, often smoked, and sometimes mushrooms. There is also a recipe for Ukrainian vegetable soup. Solyanka is one of the most popular soups with cucumbers, usually pickled and with brine, sauerkraut. 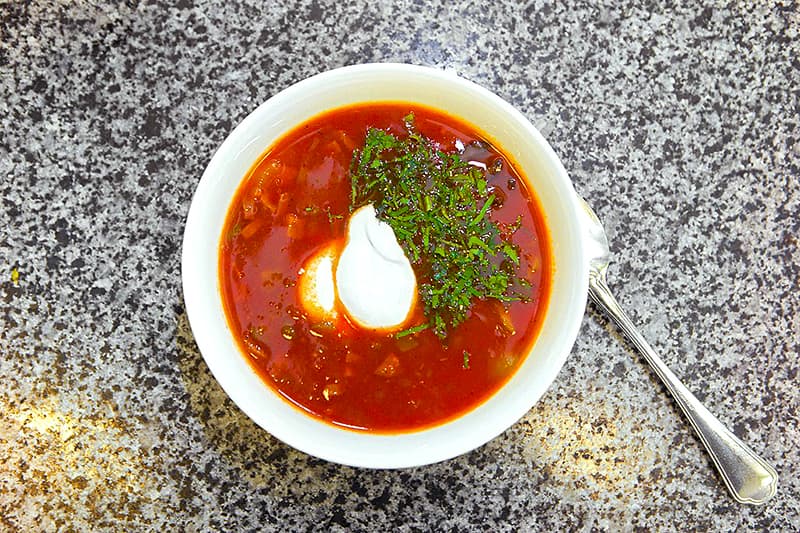 As usual, Solyanka is served hot, with a big additional spoon of sour cream and a loaf of the healthy ethnic Ukrainian sourdough bread.

Kapustnyak – the most frugal cabbage soup in the Ukrainian cuisine

To tell you the truth, that there is nothing easier than to cook Kapustnyak but if it is good this means that you are a master chef. At your own kitchen, at least.

The traditional Ukrainian recipe of Kapustnyak is super easy but requires some skills and experience. All you need is to cook a very strong broth from bones or vegetable stock, add millet and shredded cabbage. Everything is in timing so don’t overcook it. Sometimes the sauerkraut is added but in the Ukrainian recipe, fresh vegetable is used.

There are a lot of different Ukrainian recipes of Buckwheat soup but in fact, it is a very nutrient and healthy dish that will make you feel full the whole day. 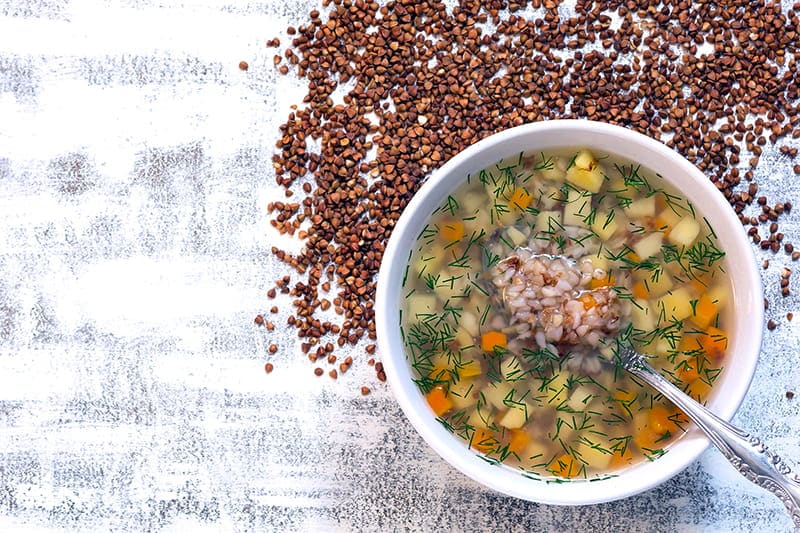 To make the traditional Buckwheat soup is very simple. Use only the best quality organic beef with bones, pork, poultry, or vegetables to cook a stock. Then add cut vegetables, add buckwheat and slowly cook until it’s done. Add the sautéed onions, and serve hot. Especially good in the winter season.

In the end, it must be admitted that Ukrainian cuisine is rich in different types of soups from a huge variety of ingredients. The traditional recipes are easy and everybody can have a great soul food treatment while eating the bowl of a delicious Ukrainian soup.