Salo is a famous traditional Ukrainian food, made of cured pork fatback or boneless pork belly, usually without lean meat and skin. It’s also known as lard, however, salo is not melt down. 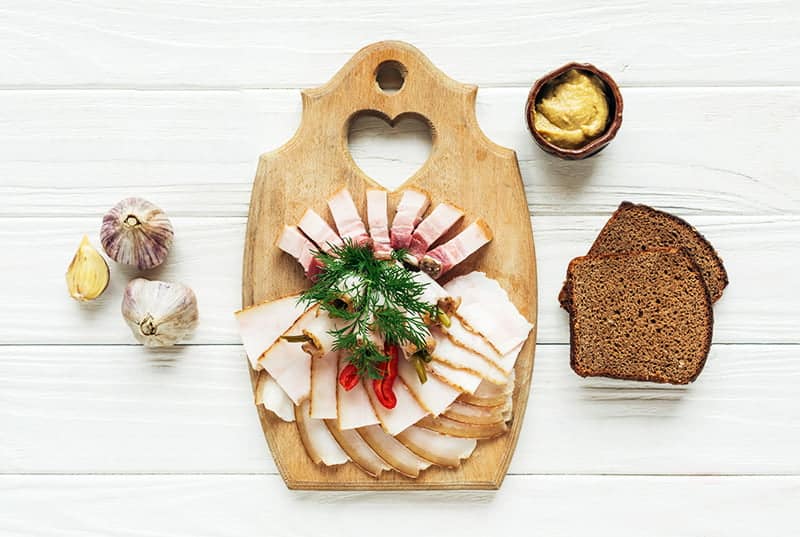 History of salo in Ukraine

In the Middle Ages, on the territory of Kyiv Rus (modern Ukraine) cattle were very common besides hunting. Beef, lamb, pork, chicken, duck, and goose meat – the average diet of the ancient Ukrainian population. Documents of that time, including Russkaya Pravda (12th century), provide valuable evidence of the widespread use of red meat, poultry, and a rich variety of other products.

In the Carpathian Mountans in the early XVI century tax lists provide information on a significant number of pigs kept by local people Hutsuls in the Galician land. Domestic pigs were fed with nuts in beech forests.

There is an interesting fact, that in Ukraine in the XVIII and XIX centuries pigs were raised greasy and meat was consumed less. According to ancient n documentation, archaeological finds, meat was consumed a lot in the Middle Ages, much more than in recent times.

Salo was used not only as food but also as treatment. Additionally, spoiled yellow bitter salo wasn’t thrown away but applied as waterproof cream for leather shoes and equipment. Sometimes it was used as hand soap that wasn’t drying a skin.

In Ukraine Salo still is a part of the traditional national cuisine and it’s unofficial symbol.

As a symbol of Ukrainian cuisine, as a product and a dish, Salo still occupies a significant place in the system of culinary values and is an expression of the Ukrainian character. This is evidenced by numerous folklore examples. Verbal formulas that have become entrenched in the ritual sphere, everyday (non-ritual) songs have preserved the stereotype of the idea of this product. One of the famous Hutsul song Kolomyika still sings how the girl with salo on lips is a romantic target forever:

And forgot to rub –

The guys will be kissing

There are many proverbs and sayings about Salo, which reflect the attitude of the subject of the average Ukrainian:

To make salo cuts of fresh fat with skin are covered with dry salt or less often smoked. Also it can be brine cured in barrel with water salt, garlic and black pepper. 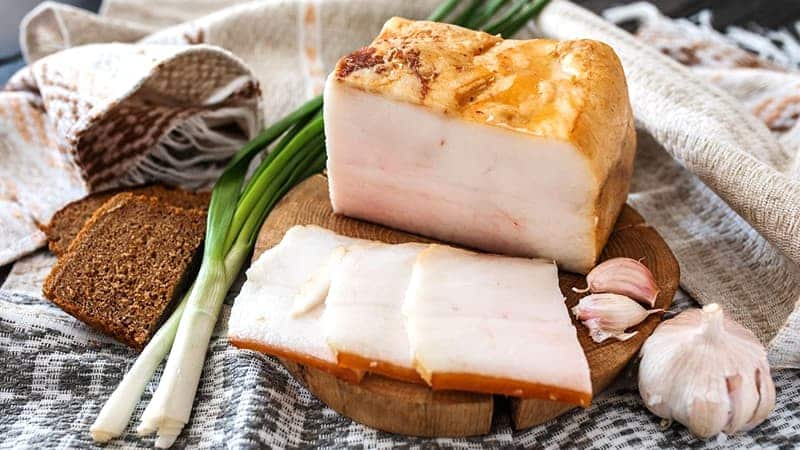 Traditionally, cuts of fat for salo are preserved in clean wooden boxes, put skin side down layer by layer with salt and minced garlic.  Then  they are left in a cool place without light for some time to be done, up to six months – a year. It’s very important to keep the place dark and not to over age the product because it can’t be used as food any more.

How to cook and serve Salo in traditional culinary

Ukrainian Salo is ready to be eaten raw. It is taken from the preservation box, the skin is usually cut, sliced thinly and eaten with a slice of a rye bread with a garlic glove. The rest of the taken fat is kept in the refrigerator of freezer. The skin was used as the addition to bones for borshch and soup stock. After boiling it was taken away, dried a little, cut on small pieces, fried on vegetable oil or lard and added as topping to many dishes, usually Varenyky or Halushky. 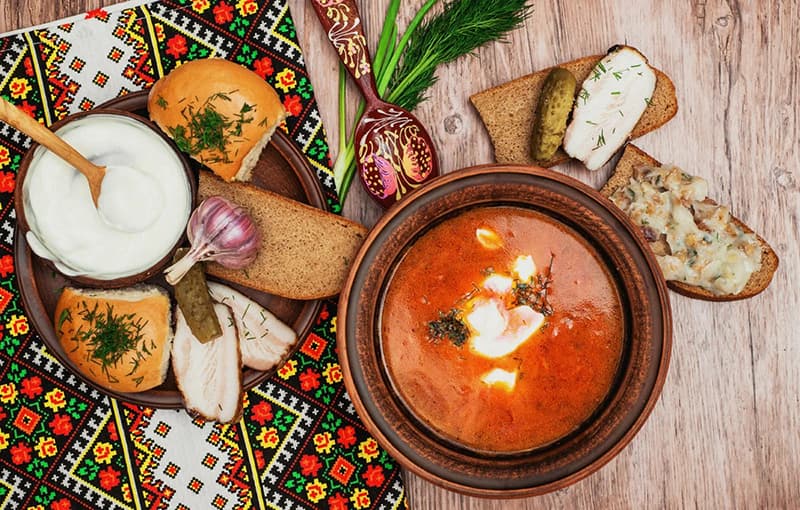 A piece of Salo is added to the traditional Ukrainian Borshch in the very end, it is smashed with garlic. This gives a specific aroma and taste to this ethnic dish.

Additionally, sliced salo can be fried and become crispy pork rinds called Shkvarky. They are used as toppings to different dishes, for example Snap Beans with Pork Rinds, or simply as snacks in a little amount