It’s an interesting fact, but the Ukrainian traditional cuisine is quite representative of the vegetarian style of life. You see, meat was eaten usually on holidays, much more in Winter and Spring, and on different special occasions like weddings. During summer for weekends sometimes the Ukrainian ancestors had poultry, but at whole the ancient Ukrainian cuisine considered to be plant-based and whole wheat. If not to count cooking meat itself, practically all Ukrainian recipes can be turned into vegetarian and cooked on plant broth or just without adding meat.

However, Etnocook wants to draw your attention to the Ukrainian vegetarian food that is nutrient and delicious. The Ukrainian ethnic vegetarian recipes include soups, main course, sauces, and desserts. Actually, you can form an excellent vegetarian menu using only traditional ethnic dishes proved by centuries.

As far as You know, mushrooms are a very popular Ukrainian vegetarian food. They are used in ethnic dishes for thousands of years in Ukraine. You can find different types of the first courses, fillings, and sauces with them. The Ukrainian vegetarian recipe of Mushroom Soup with Dumplings is very simple and easy to cook. This dish is a perfect traditional Ukrainian comfort food in any season. 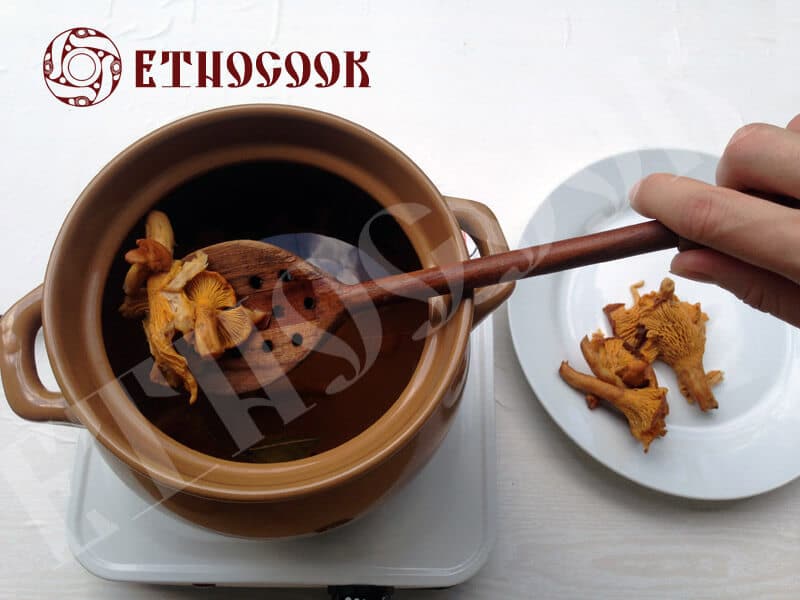 This perfect Ukrainian vegetarian soup can be made of different types of mushrooms, chanterelles as in the recipe in the link below, honey fungus, during winter usually dried white mushrooms are used or any other you like. The vegetables for the ethnic vegetarian Ukrainian Mushroom soup are green peas, cabbage, greens. Your taste and imagination allow you to add other ingredients. Also, this Ukrainian recipe without meat contains Dumplings without filling Halushky, which make this vegetarian dish very nutrient and you’ll feel full much longer during the day.

Find the recipe of the Ukrainian Mushroom Soup with Dumplings on the Etnocook website.

As it is well known, dumplings Varenyky are the unofficial symbol of Ukraine. Little pieces of filling are covered with little rounds of flat unleavened dough, press the edges in form of a crescent, and then Varenyky are boiled for a couple of minutes. It is a special vegetarian dish in Ukrainian cuisine because the traditional fillings were cottage cheese, cabbage, berries, poppy seeds. 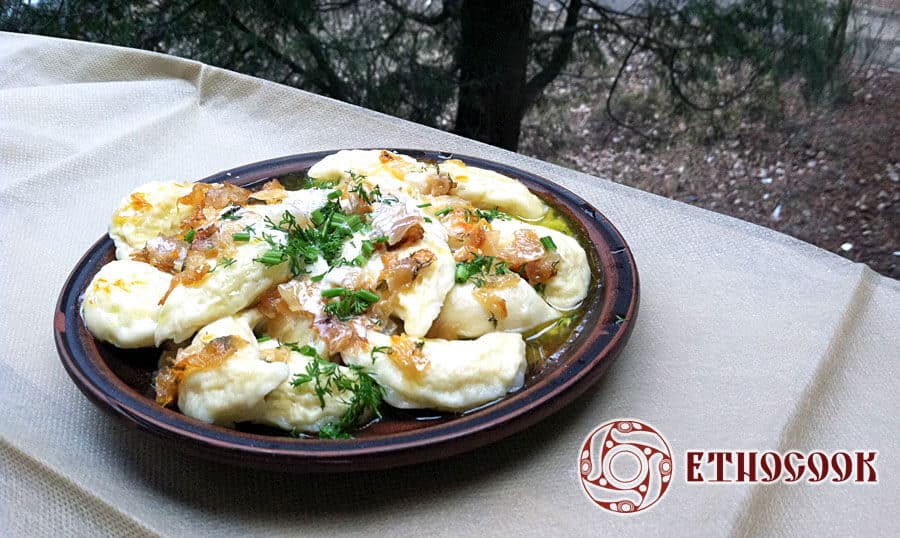 The very popular recipe of the Ukrainian vegetarian dish Varenyky with sauerkraut needs some skills, however, it is definitely worth it. Sometimes a fresh cabbage can be used as a filling, to taste. It is a very tasty Ukrainian traditional food without meat that is perfect for special occasions and holidays.

Teteria is a famous vegetarian Ukrainian dish of the Cossacks – elite Ukrainian warriors in the 17th century. It is described by the French cartographer, engineer and architect Guillaume Levasseur de Beauplan, who described it as a rye flour dough cooked with millet porridge. It is very easy to cook and has yellow-grey color. Teterya is served warm, with sautéed onions with oil and, sometimes, grated carrots. Additionally, are added chopped dill, parsley, mashed garlic to taste. 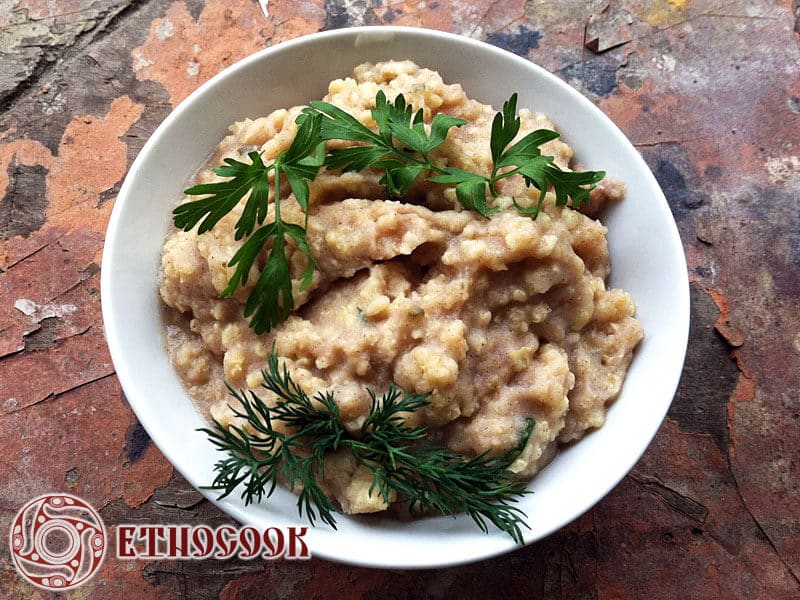 Unfortunately, nowadays the Ukrainian vegetarian recipe of the Cossack’s dish Teteria isn’t widely used, but it is restored by Etnocook. If you want to try something new from the traditional Ukrainian cuisine, this is a perfect opportunity.

The Ukrainian vegetarian food Dumplings without filling Halushky are very tasty and simple. They are made of unleavened dough, sometimes with cottage cheese, vegetables, greens, and eggs. It is a special meatless dish in Ukrainian national cuisine. 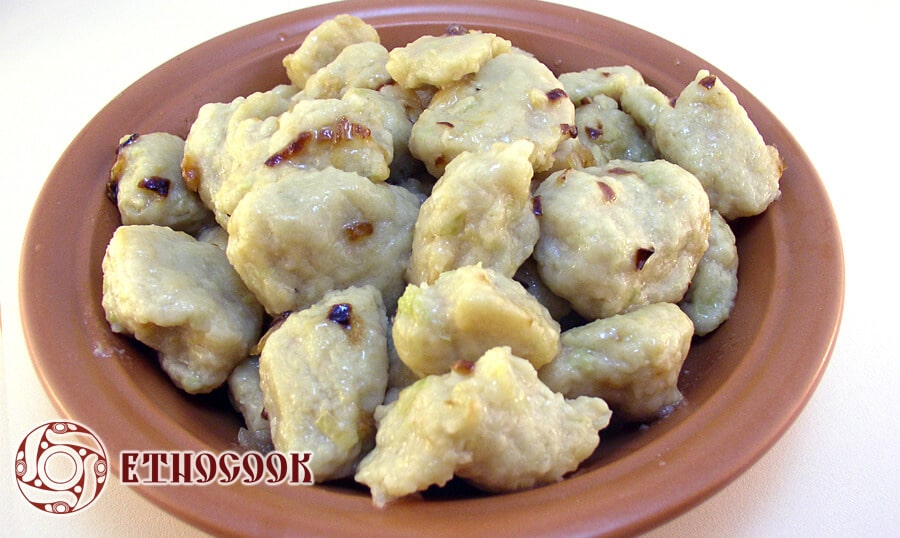 This Ukrainian vegetarian recipe is known for ages, these little boiled pieces of dough were cooked by Ukrainians before the noodles were invented. Dumplings Halushky were so easy to cook that it was the most popular everyday dish, besides porridges. They were cooked for dinner and the leftovers sometimes were even served the next day, with any sauce or gravy to taste.

It is hard to imagine more vegetarian food than Ukrainian bread. The traditional rye bread is made of sourdough, water, and rye flour. The Ukrainian vegetarian food Black Bread is also practically gluten-free. It is low-caloric, has a low glycemic index, full of dietary fiber, B6, iron, and magnesium. 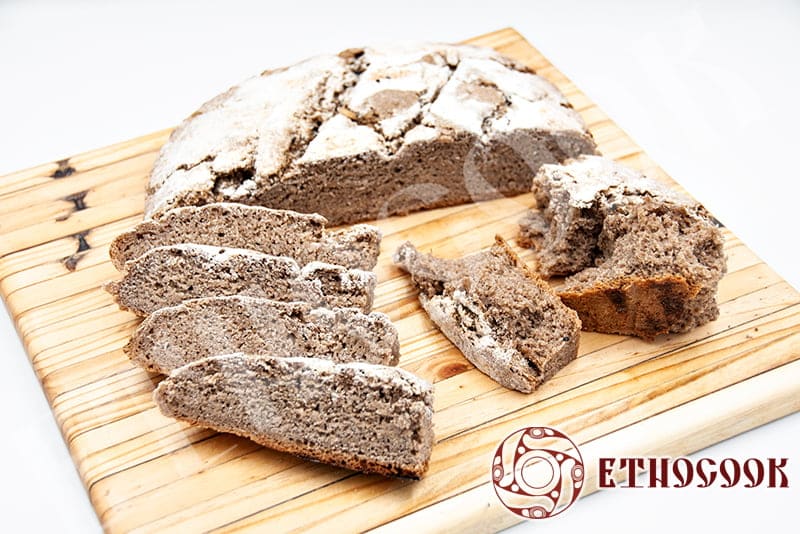 The Ukrainian vegetarian recipe of the Black Rye Bread needs some skills and a lot of patience. The fresh loaf as a result has a unique aroma and a special sweet and sour taste. It is perfect with a bowl of the Ukrainian red beet soup Borshch, Shpundra, mushroom gravy, and as a nutrient snack. Serve a fresh loaf of cooled rye bread with a thin slice of Ukrainian pork fat Salo and chopped green onions. Yummy.

Goat cheese with spices and herbs

For those people who eat milk products, there is a unique Ukrainian vegetarian recipe of goat fresh soft cheese in oil and ethnic spices. This is a light and nutrient appetizer and an excellent ingredient for salads with fresh vegetables and greens. 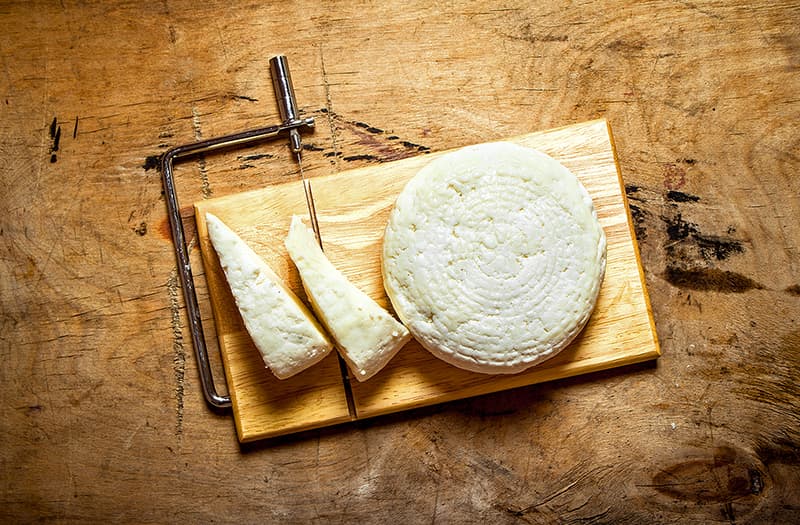 Goat cheese differs from other types of this product. The Ukrainian fresh goat cheese has a very specific taste and flavor and with spices, it is a perfect vegetarian dish worth trying. Additionally, it is low in lactose content. It is usually served with a loaf of the Ukrainian sourdough bread.

As it was said, mushrooms are widely used in Ukrainian vegetarian cuisine. This popular Ukrainian vegetarian sauce is a great addition to famous varenyky, halushky and porriges. Actually, with only a few ingredients you will have a real masterpiece that will complete practically any even a very simple dish. 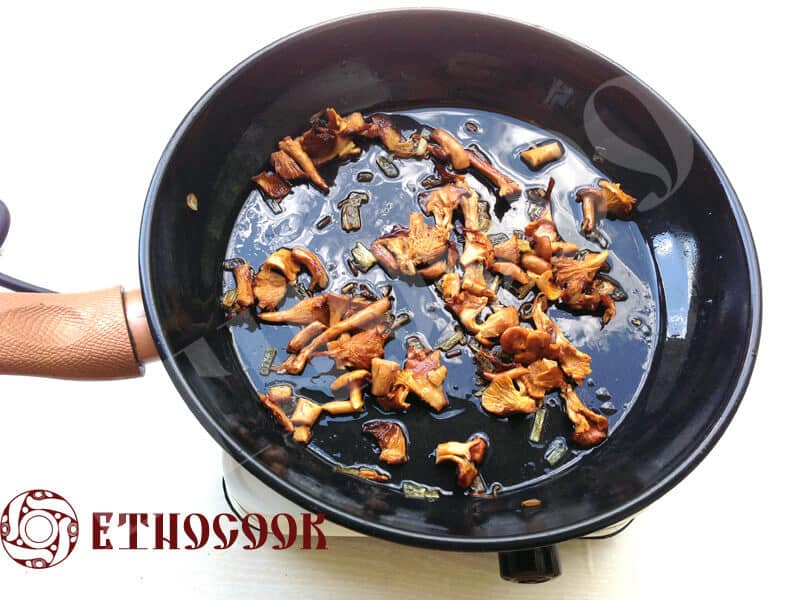 To cook the simplest Ukrainian Mushroom gravy, you need mushrooms, mushroom or vegetable stock, a spoon of flour mixed with oil for thickness. In a very popular Etnocook recipe, sour cream is used, with different spices, dill, and garlic. The Mushroom gravy is served hot for savory dishes, and it is essential in Ukrainian traditional cuisine.

Tsvitly (also known asTsvikli, Tsvykli) is an ethnic Ukrainian vegetarian food cooked for Winter and Spring holidays. Historian researches show that this recipe has come to us from ancient times and its ingredients were used not only for cooking, but also as medicine. Modern sciens has researched that the enzyme horseradish peroxidase, found in the Ukrainian horseradish Khrin plant, has an essential influence on molecules and brain capillaries. 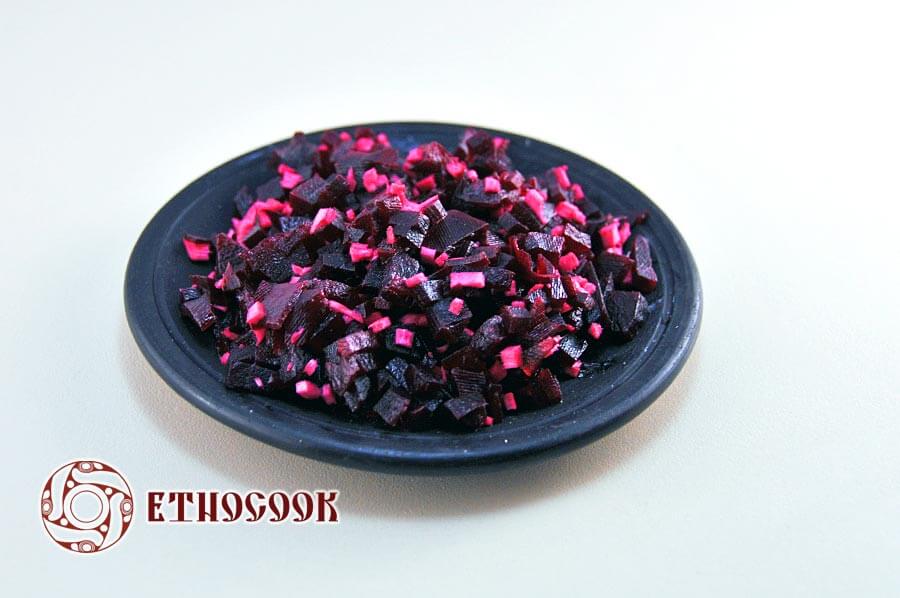 Horseradish was known to the Ukrainian ancestors from pre-historic times. In Ukrainian, its name is “хрін” (khrin), and it sounds similar in other Slavic languages, for example in Polish “chrzan”, in Czech “křen”, in Slovanian “chren”, in Romanian “hrean”, in Lithuanian “krienai”, in Bulgarian “хрян” (khryan), etc.

Ukrainian Tsvykly vegetarian pasta is made of grated boiled or baked red beetroots and horseradish, sometimes with adding some acids for more light flavor. This traditional and sacral dish originating in Ukraine is consumed in very little amounts because it considers being very hot. Serve a teaspoon of cold Ukrainian vegetarian horseradish pasta Tslitly with any savory main and side dishes.

When we are speaking about the Ukrainian vegetarian recipes, Cheese pancakes are strongly recommended to try. These are little pancakes made of cottage cheese, often with wheat flour, chicken eggs, dried or fresh berries, raisins, etc. 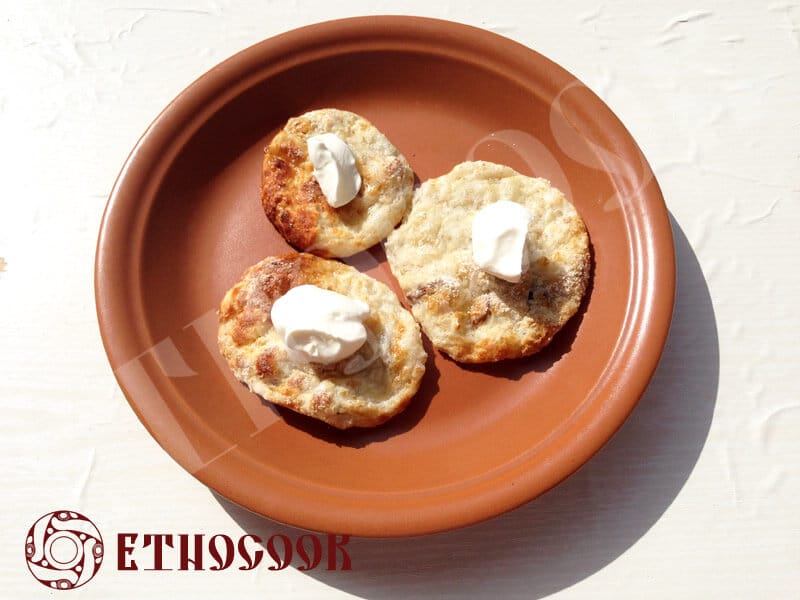 The Ukrainian vegetarian food Syrnyky is usually served hot for breakfast, with sour creams or jam on top. It can also be a dessert, served hot or cold, and as a special treat.

Etnocook offers a Ukrainian recipe of baked dish Syrnyky without flour that tastes very good and is healthier and easier to digest.

Pampushka (pl.Pampuhy) is a sweet Ukrainian vegetarian food. Pampuhy look like round doughnuts without a hole, they are made of leavened dough with jam or poppy-seeds filling and fried. There are different types of Pampushky and some of them, especially made of rye flour without any filling were made for every day. 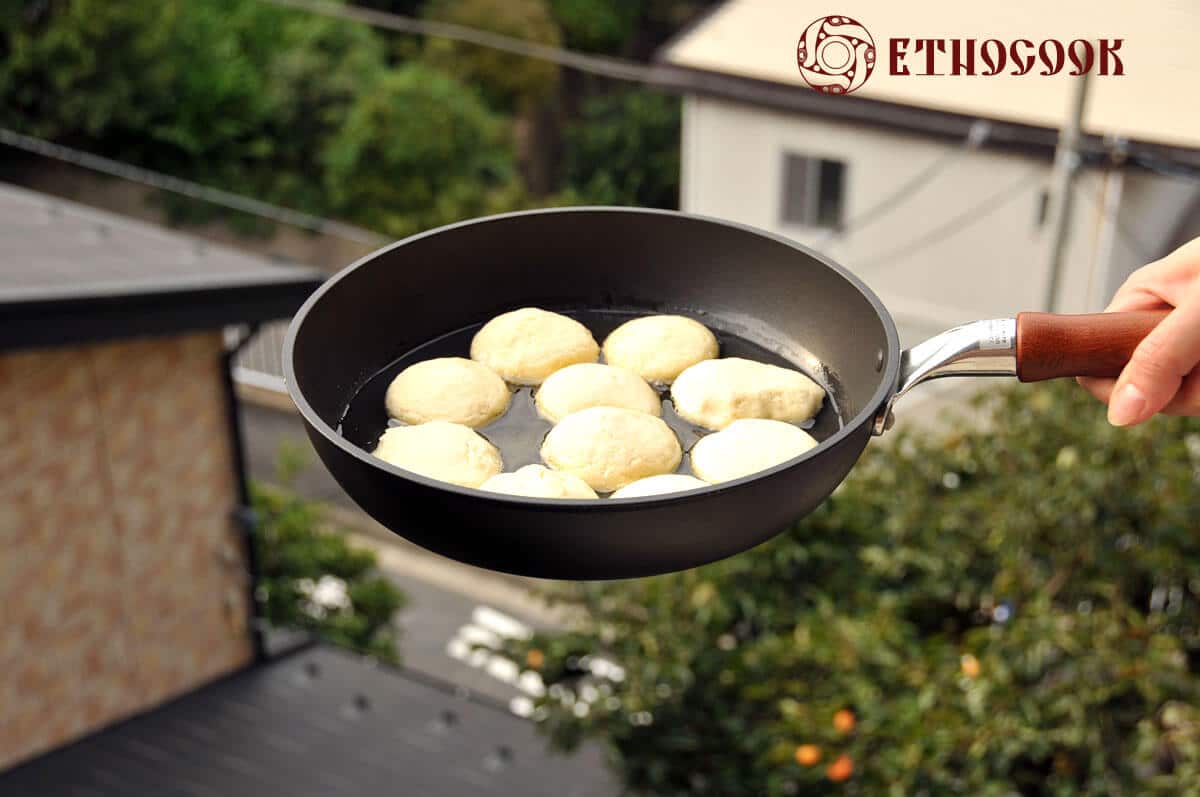 Pampuhy with poppy seeds have deep sacral meaning for Ukrainians and are baked for holidays and special occasions.
Serve the Ukrainian vegetarian dish Pampushka cooled, with honey or sugar powder on top. Best tastes with the Ukrainian compote Uzvar made of dried fruits and berries.