“Kalach (round bread) can be bored to be eaten, but the bread itself will never.” – the old Ukrainian proverb.

It is well known that bread is present in our everyday nutrition as one of the simplest products. And, as a rule, we entrust its baking to specialized bakeries. However, it was not always like that, every family baked bread with caring hands for the whole family, the process itself was extremely important, meaningful, and the finished product was healthy food that was filled with strength and energy. According to the dictionary, bread (ukr. hlib, hlibchyk) – a food product baked from flour or cereals; bread and salt – the common name of food, used as a sign of prosperity and hospitality. 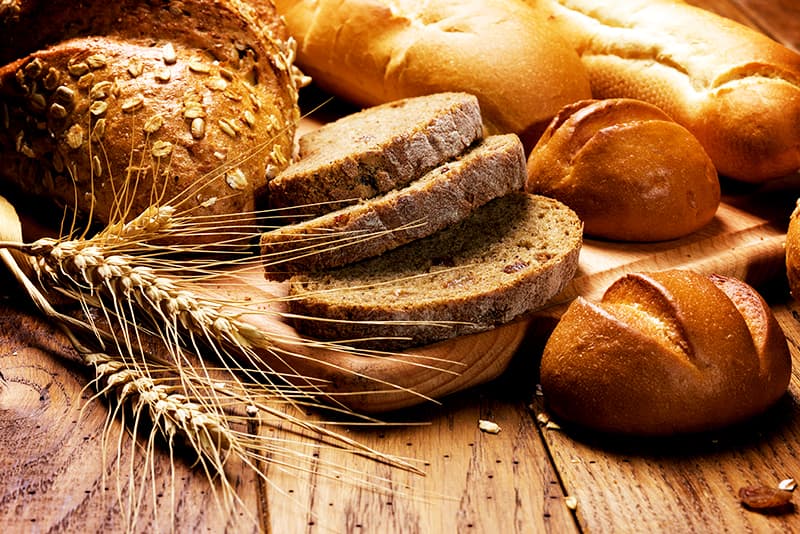 From ancient times, people in the Ukrainian lands bake bread and treat it with special respect. Big and fluffy, both daily, usually rye and ceremonial bread, often made of wheat, were considered to be special, iconic, and the process of making and baking – ritual, full of mysterious magic, enshrined in the empirical experience of ancestors. This product accompanied a person throughout his life, through it an invisible connection was established with the Universe. The bread was present at birth, at dedications, matchmaking, weddings, birthdays, holidays, with it guests were met. Additionally, this food accompanied in the last journey.

Bread has traditionally been large – like a harvest, round – like the sun, exquisite and skillfully decorated loaf – as a symbol of a rich and happy married life. The form was based on the circle, as the first symbol of the Sun, hence the various Slavic bread words and names: kolosok (so-called “ear”, grain-bearing tip part of the stem), kolobok (the made of dough character of an East Slavic national fairy tale), ko / a / lach, ka / o / lyta.

Korovai is a famous Ukrainian sacral round high and fluffy bread, nicely decorated. Korovai is usually baked for weddings.
It’s known from ancient times and was used thousands years ago in pre-christian times by the Ukrainian ancestors in ritualsandwas scarified to Slavic Gods instead of meat.

The word Korovai comes from the Proto-Slavic word “корва” (korva) that means “cow” (meat from the cattle was used in rituals from the prehistoric times). This word was feminine and male suffix “ай” (ai) was added to it: koro-vai. This has a huge meaning as the Ukrainian ancestors believed that the bread was a child from the field impregnated by God. This word is also in other Slavic languages, for example, in Lithuanian “karvojus” means a “wedding pie”.

Nowadays Korovai with a lot of decorations is baked for weddings, the bigger it is the better. It has a circle shape as the sun and symbolizes wealth and happiness. There are a lot of traditions and proverbs connected to the whole process of making this bread. The dough was made only by a happy married woman in a good mood and it was put in the oven by a man. A lot of songs were sung during the process and special phrases were said in order Korovai to be “white as a day, nice like the God, bright like a sun”. There is a belief that the bigger Korovai is, the better life a couple will have.

Additionally, Korovai was baked to the arrival of important guests. They were met with this incredible bread and a pinch of salt on the Ukrainian traditionally embroidered cloth called rushnyk. This ceremony shows the highest level of hospitality and respect.

Also there is a special Korovai baked for funerals. In the past it was fully decorated as the wedding one and after the burial it was shared and eaten by guests. 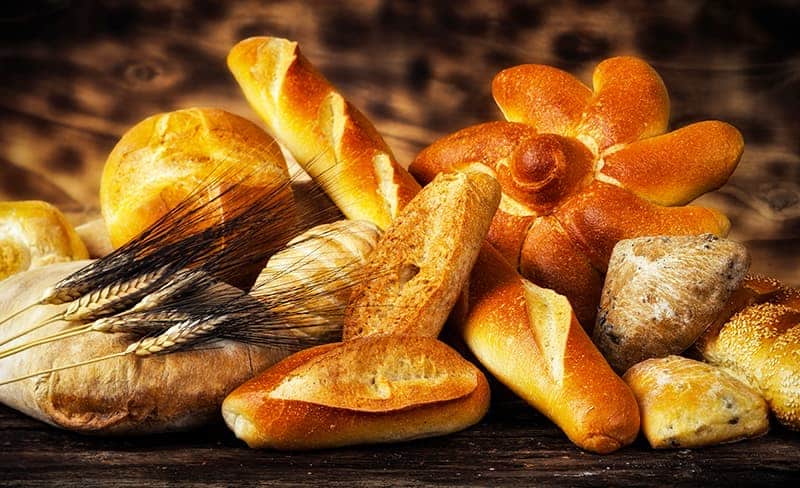 Kolach (Kalach) is a round traditional Ukrainian bread baked from a twisted and intertwined leaven dough, often with a hole in the middle, usually baked for holidays.

The word “kolach” comes from the Proto-Slavic word kolačь and has the root from the word “коло” (kolo) that means “circle” as this type of bread always has a round shape. It is known as Kalach, because the replacement of the vowel [o] with [a] occurred due to assimilation [o] before the next syllable with stressed [ɑ] in the Ukrainian language.

Despite the everyday bread Kolach was baked from the white wheat. It was mostly a ritual bread and was considered to be especially tasty and delicious. Ukrainian Kalach symbolizes wealth and happiness. As it needs a lot of time and skills, the baker has to be quite hardworking and patient. There is also a popular Ukrainian wise saying

“If you want to eat Kalach, then don’t lay on the oven”

that means that you need to come from your comfort zone to achieve results.

Paska is one of the most famous Ukrainian bread baked for Spring Holidays, Velykden.

It was a part of pagan offerings to gods in pre-christian times, together with colored eggs (pysanky), meat, horseradish. Kulych is the church name of Paska, from Greek κόλλιξ (kollix), widly used in Eastern Ukraine, Sloboda Ukraine and in Belarus. Despite of a great amount of recipes, the main is one for all countries from Lithuania to Crimea. Traditionally to bake Paska is a Slavic tradition and in Russia areas it was made by Slavic people only in a little part that was in Kyiv Rus (VII-XIII). 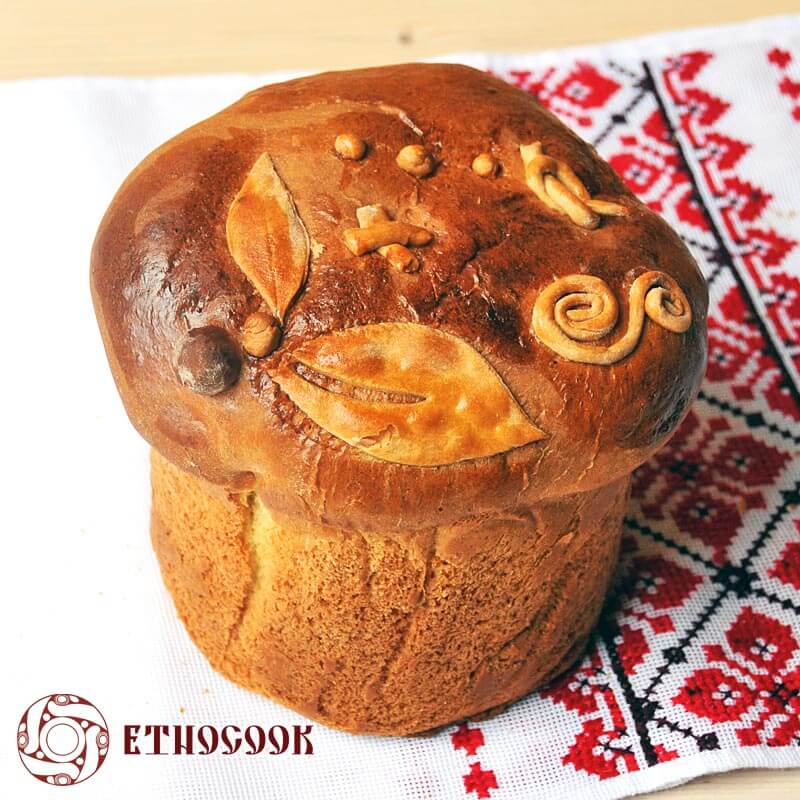 Paska symbolizes the eternity of the human life, the Sun, the men’s power, the big future harvest.

It is a fluffy high round big bread made of leaven dough from the wheat flower. The whole process of making Paska is a special ritual. For example, the person, who makes it, has to be in a very good mood, the dough has to rest for growth in total silent and the ready product has to be without cracks on top.

Pampushky (Pampuhy) are traditional Ukrainian little round buns made of leaven dough (a homemade sourdough starter was used) of wheat, rye, buckwheat flour. They were usually baked for holidays, with or without fillings.

Pampushky are very widespread and have a status of the traditional Ukrainian dish. The written mentions about them can be found in chronicles of the Cossack era (XV-XVII).

For ethnic Winter Holidays (Sviatvechir) and for funeral dinner special Pampushky were made, plain or with poppy seeds filling. They were fried in a big amount of oil like doughnuts only without a hole in the middle. Such Pampushky can be without filling or with fruits, berries, poppy seeds, or jam inside.

Salty Pampushky with garlic also were baked on Sundays and served with the Ukrainian red beet soup Borshch.
For everyday Pampuhy from rye flour were made.

It was a popular food in Slavic society. In Ukrainian territories Perepichka was little round pancakes made of sourdough starter with flour. Perepichka despite the bread considers to be baked fast, without long growth of leaven.

The bread has always been sacral in Ukrainian ideology. Ukrainians bake high leaven fluffy bread made of sourdough starter and flour of different types. Actually, for everyday the rye flour was used and on Sundays, holidays and special occasions white wheat round bread Palyanytsya was baked.

Ukrainian bread is round and has a shape of sun. People always pay respect to a loaf of bread, it was never thrown away, and was used even in traditional medicine. Ukrainian bread is a symbol of wealth and hard work.

Black bread has been for centuries very popular among the Ukrainian population. It is an everyday rye bread, made of rye flour, sometimes from the mix of flours and a sourdough starter. Black bread isdenser and moister then wheat bread, however, it lasts longer.

Nowadays researches have shown that the black bread is healthier for the everyday consuming as it is better for the digestive system and richer with nutrients.

Bublyk is a traditional Ukrainian small thin bread roll, with a big hole inside. It is made of leaven wheat dough, eggs, butter, and milk. Bublyky are boiled and then baked, they have chewy structure, often sweet.

Little children while playing put Bublyky on eyes like some sort of funny glasses. There is an old Ukrainian saying “The hole from Bublyk” that means nothing, an empty space.

Bublyky are usually made in a big amount, and used as cookies to eat with traditional Ukrainian beverages as Uzvar. 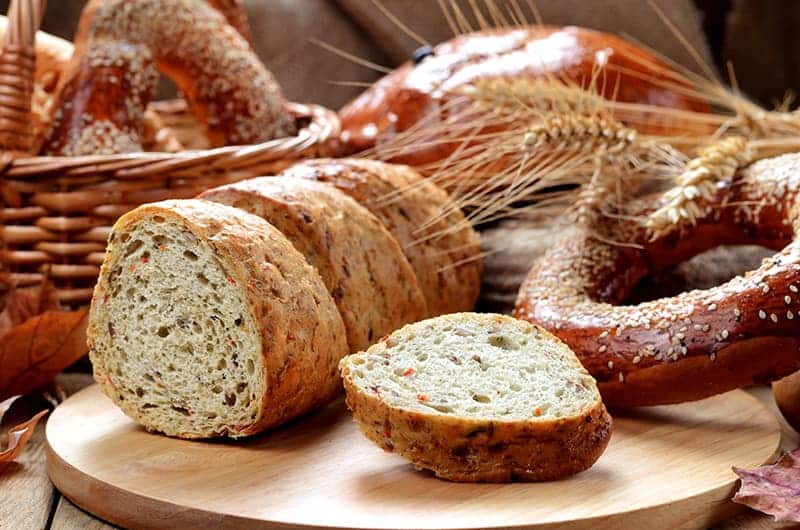 From the pre-historic times till recent days bread was baked at every Ukrainian home.

In Ukraine healthy leaven for fermentation were cultiveted in every family. The simplest Sourdough starter made from flour and warm water. It is well known from ancient times when people began to make bread from dough with leaven agents. It is natural and good for health. This starter is added to different types of dough to make tasty fluffy bread, pancakes, cakes.

Ukrainians used also Natural Sourdough Starter made of Hops that is known from ancient times. Especially popular it was in Kyiv Rus and till XIX century. Bread made with the help of this natural starter is good for health, really very soft and aromatic

For the most simple whole-wheat sourdough starter are taken only three ingredient. To make it just mix water and flour and add some honey or sugar and place it in warm dark place for 10 hours. Then add more flour and water and wait another 10 hours. Repeat these actions for three-four days and the enjoy the simple homemade sourdough starter for the best Ukrainian bread.